I’ve often been asked where I get all my secondhand stuff. Especially when it comes to the thrift stores. So, today is the first post in a four-part series about my favorite Indy spots for buying secondhand. I’m starting with the thrift stores, and then will move to consignment stores, then antiques and finally vintage clothing. For purposes of interpreting my lovely map, all the blue circles with stars in them are Goodwills I like to go to, and the red circles with a white dot in them are the “Others” I reference in this post. 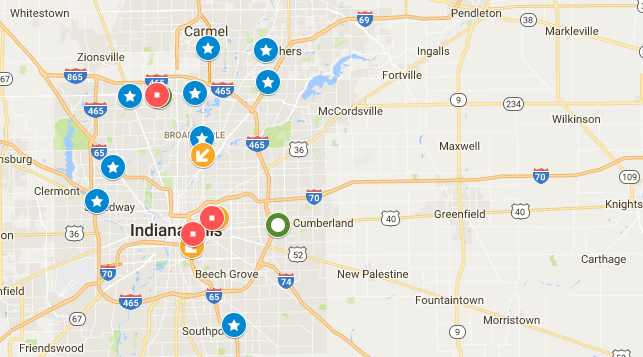 Goodwills are my main focus when I’m thrifting. No particular reason, I just tend to end up there. Word of warning… before I get into talking about the REAL Goodwills, I’ll take a moment to mention “Vintage Vogue” (stores that are are owned by Goodwill, and are supposed to represent a curated collection of the best Goodwill donations.) There is one to the east of BR on 62nd St. (before you hit Keystone), and one in Fountain Square. However, the locations could be considered irrelevant, because I don’t recommend visiting. I was THRILLED when I heard about the concept, but the Indy locations have left me seriously disappointed. I think this is likely due to the decentralization of curation. Though I don’t know for sure, I would guess that employees in the back are responsible for sorting out stuff that could be sold for more, and that method depends on the knowledge of every employee at every Goodwill (a flawed method, to be sure.) I suppose the other method could be all items going out to the floor, and dedicated curators visiting stores on a regular basis, though this seems very inefficient. The stuff you’ll find in the Vintage Vogues (in my experience) is NOT the best of the Indianapolis Goodwills, and the prices are outrageous for the junk they are peddling. However, I’ll make one disclaimer:  because of terrible first impressions, I very rarely stop in at these shops, so perhaps things have improved.

I’ve listed 10 Goodwills on the map, all in the Indianapolis vicinity, and I can’t pinpoint my favorites. If I HAD to, I might pick Fishers, but I can’t put my finger on the why. I just think I’ve been the most MCM furniture there (though, it hasn’t been much.) Southport I get to very infrequently, but I usually hit it when I’m making the trip down to the Southport Antique Mall. The Goodwill off 37th I stop at when I’m headed to my hometown, and the Goodwill in Carmel I usually only go when I am picking something up at World Market.

The newest Goodwill that I’m aware of, in Fountain Square, has been pretty solid, though time will tell how picked over the selection gets there. (Cool people live in the area, so my assumption is that there’s a higher chance of people with similar aesthetics shopping there, compared to the ones in the burbs. That theory could be bogus, I just semi-believe it. Half of the time.)

If you are a DIE-HARD saver, you should go on the first Saturday of the month. I tend to not, because as serious as I am about deals, I get shopping rage really easily, and have been known to find items I want to buy, get in the very long line, throw a fit shortly after because the line hasn’t moved, abandon my items, and storm out the store. (Unreasonable and unbecoming, I know.) Or, if I have SUCH a prize that I am willing to spend 20 minutes in line for it, I spend the entire time huffing and sighing loudly and rolling my eyes like I’m experiencing an unforgivable imposition. Ridiculous behavior, so I tend to just avoid putting myself in a position where I will inevitably come across as an insufferable person.

(Warning: Read on only if you can handle the terrible Christian music they pipe through the speakers at all times.) You with me? Okay. I only go to two. I think perhaps, there ARE only two in Indy. Not sure about it. But, I stop in on the one on East Washington (just outside downtown) from time to time, and the one on 86th in the Nora area. I’ve found mostly little housewares items, and one time I found a nice Dansk pot for 3.99 at the Nora store, but abandoned it because it was brown and I was stressed about storing things at the time. I still wonder if I made the wrong decision…

I saw a great yellow MCM sofa at the one on Washington once, but it was already sold. I think that one encounter keeps me going back, honestly, because I really haven’t found much else there. I’ve snagged a couple of dresses and a pretty cool vintage Nike polo. Also – note that they are closed Sundays.

Now we’ve come to to part where I talk about the independent stores that aren’t part of a thrift chain. Hopefully, this section will actually be most valuable to you, because EVERYONE knows about Goodwill and Salvation Army. Well… I assume everyone. Anyway, note that all three I’ve listed are closed Sundays. Just in case you like to do thrifting on Sundays like me.

I’ve known about this place only a couple years, and I’m particularly impressed with the housewares. The clothes are meh. It’s run by the Society of St. Vincent de Paul, which I don’t know much about, but run REALLY well. All appliances are tested and marked as such, and the selection is pretty nice. I feel like the people who donate here are actually making thoughtful donations, not just dropping off their junk. You know what I mean? My friend got a great chair here, but I’ve never had luck with their furniture, unfortunately. When you go in the door, start by heading to the left, into the housewares. Also – I’ve gotten some great vintage jewelry here. Website.

This is a local donation center and thrift store that is run by, and supports, the Julian Center, a NFP to benefit the victims of domestic abuse. Not only do proceeds help support the center, but I just learned that Julian Center “clients” shop for free at this store. Knowing that, I’ll likely start donating things I’m recycling to them now. (Compared to Goodwill, which I always choose for convenience, frankly.) Anyway, I’ve gotten some good clothing items here, and, I love their housewares. I’ve found some great stuff, though the care of the selection isn’t quite as nice as Mission 27. Website.

When I first learned of Audrey’s Place Thrift Store (and heard it had earned some “best of” titles), I was really excited to check it out. This was like, 8 years ago. On my first visit I got VERY confused when I accidentally entered Audrey’s Place Furniture (a collection of kinda crappy couches and stuff) instead of the Thrift Store. (Note that the Thrift store is about a block east of the furniture store.) Anyway, once I actually found the correct place, I felt like I found good stuff at each visit. For years. However, I just don’t find things very much anymore. Sadly. I’m not sure if it is because my tastes have changed (when I first started shopping there I was living in an Arts & Crafts bungalow, which is much more aligned with the type of stuff they sell), or if their selection has gone downhill. (Anyone who has opinions on that, I’d love to hear thoughts!) I found a couch there once that I almost bought, but it wasn’t particularly special (hence… my not actually buying it.) Worth a stop in if you like legit antiques (from like, late 1800s to 1940s or so), or kitchy stuff. Website.

There you have it. My summary of the thrift places I shop in Indy. (Keep in mind, I’m deliberately leaving out the antique malls, consignment store and such for later posts.) Hope this was helpful, and that I’ve helped you with your future deals-finding!

Blogger, stylist, and all-around design lover, based out of Indianapolis. Special areas of focus include secondhand/vintage fashion and midcentury/danish modern interior design.